You see, that we are talking about phoneme classes like "vowel" or "consonant".

We have not yet defined what a vowel or consonant is. We have to do that now. Start a blank Janus and do: You have just augmented the PhonesSet object by 11 new phone sets. Now we can easily find out what vowel will mean from now on, the object ps:vowel contains all vowels.

In the above lines, we've also taken the chance and have added the pad phone such that we don't have to do that every time after we load a PhonesSet from file.

You've see context questions before, in the initCI script. All the questions there started with "0=", which means they were asking questions about the central (or only) phone of a context. Now we want to cluster contexts dependent on the neighboring phones, os we'll need questions that start with "-1=" (left neightbor) or "+1=" (right neighbor). For this we have to build ourselves a QuestionSet object. Why didn't we need one so far, although we were obviously working with questions before. That's because the Tree object that uses question has an internal QuestionSet object, that it creates and fills automatically. Now we have developed new questions, that don't occur anywhere else, and we want to limit the usage of decistion tree questions to the phone sets we've just defined. So here we go:

The complete algorithm can be found in the script thread.

The startup is the same as for training the context dependent models. After the starup we should not forget to configure the pad phone, for both the distribution tree and the question set, load the distribution weights and define a minimal frame count we will want to have eventually per polyphone cluster:

The distribution tree object offers a method split which will take a tree node, put a given question in it, and creates three successor nodes, one for each of the possible answers "no", "yes", "don't know". Since we are using a pad phone, the don't-know-nodes will never be used. The ptree that is attached to a node which is being split will also be split. Every new successor node will get its own ptree containing only the polyphones that belong to them.

The main clustering loop works on a sorted list of possible splits. It will always perform the split that gives the best score. Once a split is performed, it is taken out of the list, and the possible splits for the new successors are inserted into the list which is kept sorted such that the first element of the list is always the best split.

Initially we don't have anything in our list, but we have 32 nodes in our tree that have ptrees attached and could be split. So the first thing we do is create a list of all possible splits for all ptree-carrying nodes:

Here we assume the existence of a procedure "findQuestion" which finds the best scoring questing out of a given set qs of questions for a given node \$node of a given distribution tree dst, adding the node and the found question - if applicable - to the list nodes(x), where x is the score of the found question. "Applicable" means, that nothing will happen, if no question can be found because of too low counts or other constraints. The count variable will always contain the number of so far added succesor nodes to the original distribution tree node. The above "lsort" line is doing the mentioned sorting. It fills the list scores with all so far found scores. So [lindex \$scores \$n] would give us the n-best score, and \$node([lindex \$scores \$n]) would give us a list of all splits that would get that score. Usually scores are floating point numbers such that the case that two splits get the same score happens very rarely.

Equipped with such a procedure we can now write the following loop:

In this loop we stay as long as there are splits available in the nodes array, i.e. as long as the scores list is not empty.
In the first three lines of the loop we extract the splits that have the best score, and remove them from the nodes array. Then for each of the best scoring splits we extract the nodename to be split ($name), the name of the orignal distribution tree node (\$par), and the splitting question ($quest). The the split method creates three nodes which have the name of the orignal node plus a suffix which is (\$c), (\$c+1), or (\$s+2). The successor count of the orignal node is increased by three, and eventually we call the findQuestion procedure again for all new nodes that resulted from the split.

Now it's time to talk about the "findQuestion" procedure, which, of course, must be defined before the above discussed loop. Well, here it comes:

The procedure first checks if there is a ptree attached to the given node. Only if there is a ptree attached, the "question" method of the tree object is called. This hard coded Janus-internal function will return the one best scoring question from the given question set that would split the given node. If no question was found (e.g. because the resulting successors frame-counts would become too small, or because every available question would have a constant answer for all polyphones in the ptree) then nothing happens, otherwise the description of the found split is added to the nodes array, which contains all splits of the same score.

When all the splitting is done, no more nodes can be split, then the loop ends and we can save the current status for later use:

Now we have a tree that looks something like this: 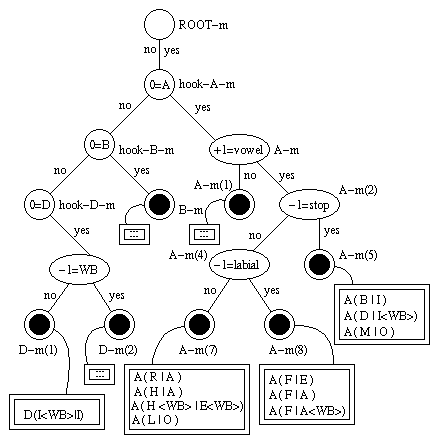 The dotted circles are leaf nodes of the distribution tree, the double-edged boxes are PTrees, four of which are show in detail. You can see e.g. that the PTree that is attached to node A-m(9) contains only polyphones whose left context (i.e. context -1) is F. This is so, because F is the only phone that does not belong to the "stop" phone set but belongs to the "labial" phone set.

In our current system we have a distribution for every single polyphone, and only 34 codebooks. What we would like to have now, is an extra codebook for each of the leaf nodes of the distribution tree, these are the nodes that have ptrees attached. These new codebooks will also need their mixture weights distributions. So what we are going to do is add codebooks to cbs and add distributions to dss for every node of dst that holds a non-empty ptree. Here it is:

Eventually we write out the finished clustered codebook and distribution description files.:

Let's have a look at what we've just created. Look at the number of distributions that you now have in the pruned distribution set. There should be much less of them than in the unpruned version. Also look at the distribution tree. Extract all the questions that were posed for the beginning segments and see if you can find a tendency towards asking more questions about the left context, also check if you can find a tendency to questions about the right context for the ending segments.