First prototypes for simultaneous translation of lectures and speeches for English into Spanish and German into English were developed, in which the audio of the lecturer is recorded, automatically translated in real-time, and presented to the audience in different ways.

With growing international information structures and affordable international travel, the dissemination of knowledge in this globalised world would be increasingly possible – if the language barrier among diverse people can be overcome. Lectures are an effective method of dissemination. Personal talks are preferable, because they allow the speaker to tailor his presentation to specific audiences, and in return allow the listeners to get access to the information relevant to them through interaction with the speaker. Also, personal communication fosters the cooperative creation of ideas and generates collaborations and ties between distant units, e.g. scientific laboratories or companies.

At the same time it is desirable to allow the participants in those talks and lectures to express themselves in their native language. Because, no matter how intensively one studies a foreign language one will always be more expressive, more fluent, and more precise in one's native tongue. For this problem human translators are currently the only solution. But they are very expensive, often prohibitively expensive, so that many lectures just cannot happen because of

Therefore, first prototypes for simultaneous translation of lectures and speeches for English into Spanish and German into English were developed, in which the audio of the lecturer is recorded, automatically translated in real-time, and presented to the audience in different ways: as subtitles on a canvas, spoken through a targeted audio device, and through translation goggles; which are heads-up display goggles that are worn to see the simultaneous translation as subtitles while we listen to someone speak across the language divide. 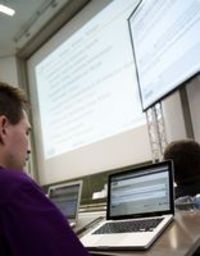 Besides targeted audio devices and translation goggles, which have beendeveloped in former projects, the possibilities for deliveringthe translation output have been extended.

During the Quaero project a web based frontend for the lecture translation system was implemented. The written translation is presented to the user as well as its synthesis.

By just opening a webpage everybody can follow the lecture using his own laptop. So it is possible to deliver the translation of the lecture in many different languages individually selectable by the user. Furthermore the web based frontend enables an easy delivery of the translations to remote users following the lecture from all over the world.